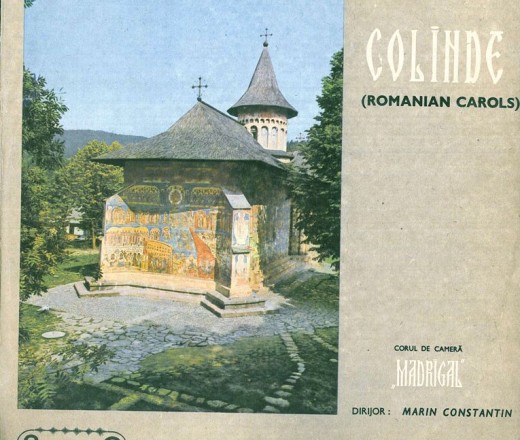 Carols form an important chapter in the Romanian folklore. Next to the folk tales with fairies and handsome heroes, next to the ballads of outlawry. the satirical verse, the magic formulas, the laments for the dead, the songs of woe, and wedding songs, the songs of longing called „Doine” and the imprecations, the Christmas carols are an important contribution to the vast patrimony of folk legends.

The first person to have collected and published such carols (Christmas Eve Carols, „The little plough”, „Vasilica” etc.) was a great master of the pen named Anton Pann, an outstanding folklorist and a gifted poet of the last century.

Later, in the period during the two world wars, a great musicologist called George Breazul, published a thick, priceless book of carols (more than 450 pages) with texts, music scores and information on the source of these small poems, all over the country — lay or religious songs — illustrated in a charming and colourful manner by the artist, sketcher and church painter of Transylvania, Anastase Demian.

The carols are a sort of invocation in verse, sung by children and lads, on the evenings of Winter Hollidays, and which were born long ago, being lost in the mist of time. . .

These carols, taken over without substantial changes, harmonized only, became true musical art under the leadership of music teachers’, and they are, in our days, successfully interpreted by the „Madrigal” choir, conducted by Marin Constantin.

Before the „Star Carols” on the evening of December the 24th, children used to sing the following, as an introduction :

Do you give us some gifts, do you?

And the older women in the houses were giving them nuts, bretzels, apples, pears, and even silver coins.

I knew these paper stars in Bucharest, quite well, for l used to belong to the group of boys of the Silvestru slums who used to wander through the out-skirts of the capital, sometimes even pushing into the center of the city.

Singing carols, we had been rehearsing for a month or two, at a class mate’s house.

„The star has appeared on high,

The star is bright,

May all your wishes turn out right. . .

For a few hours every night, from December the 24th to January the7-th, we were disturbing the quiet and fresh snow, and in the end, we had, each of us, a penny or two to spare, small silver coins worth 50 bani each. It is in memory-of my childhood carols, that I wrote later on, in life, a poem which ended as follows :

—  Today your nome is more sophisticated

And you are general manager, Alas!

And you have an almost grown up son,

Oh, how we used to rehearse, for two long months!.

To sing just once, just once in o long year ?

And now childhood and carols have gone !

Even though we could cross each other  in   the  streets, But  ever, smaller  numbers  of Christmas  Eves  are  left to us!

We smile and wipe away a tear or two,

We never shall be captains to discover islands, now . .

Among our childhood recollections, maybe the most touching are those walks in the streets of snow covered Bucharest, when holding in their hands a star made of board and paper with biblical scenes painted in water colour, the children were singing, with somewhat of a question :

„Do you receive the pretty star,

Pretty and so very bright ?

It has appeared ort the earth

And it could be seen on high,

It almost never happened that the children should , be driven away; the warm houses of the peasants or the townsfolk always wellcomed them, and the little ones would sing in various voices old poems which they had inherited from other generations. 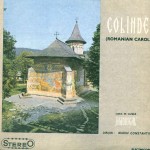