THIS RECORDING WAS MADE POSSIBLE WITH GRANTS FROM THE NATIONAL ENDOWMENT FOR THE ARTS, THE NEW YORK STATE COUNCIL ON THE ARTS, MR. AND MRS. GORDON GETTY, AND FRANCIS GOELET

LUKAS FOSS has been music director of the Brooklyn Philharmonic since 1971. Previously he was music director of the Buffalo Philharmonic and the Milwaukee Symphony, and was also a professor of music at UCLA. He studied composition with Paul Hindemith and conducting with Fritz Reiner at the Curtis Institute, and with Serge Koussevitzky at Tanglewood. An outspoken advocate of contemporary music, Foss has conducted most of the leading orchestra: in the United States and Europe. An eminent composer in his own right, Foss conducts a program of his own works on New World (NW 375).

LEONARD SLATKIN has been music director of the Saint Louis Symphony Orchestra since 1979. He made his conducting debut with the Youth Orchestra of New York at Carnegie Hall in 1966, and his European debut in 1974 with the Royal Philharmonic Orchestra. Slatkin conducts major orchestras and opera companies throughout the United States, Europe, and Asia, and has enjoyed a continuing association with orchestras such as the Chicago Symphony, the New York Philharmonic, the London Philharmonic, and the Minnesota Orchestra. Slatkin has recorded extensively with the Saint Louis Symphony (including two New World discs) and with other orchestras.

GERARD SCHWARZ is music director of the Seattle Symphony, Lincoln Center’s Mostly Mozart Festival, and the New York Chamber Symphony, and serves as principal conductor of the Waterloo Festival in Stanhope, New Jersey. Schwarz has premiered contemporary works by more than twenty-five composers throughout his career, including David Diamond, Henri Lazarof, and Alan Hovhaness. He began his musical studios with piano les-sons, and later studied trumpet with William Vacchiano. Schwarz has recorded for the Delos, Nonesuch, Angel, and New World labels, among others.

GARY LAKES has been acclaimed worldwide both as heldentenor and one of the leading interpreters of the great romantic tenor roles. His performances at the Metro­politan Opera include Don Jose in Carmen and Siegmund in Die Walküre, an opera he has recorded with James Levine and the Metropolitan Opera Orchestra. His recording of Ariadne auf Naxos, also with James Levine, won the 1988 Grammy Award for Best Opera Recording. He has appeared as guest soloist with such conductors as Georg Solti, Riccardo Muti, Lorin Maazel, and Daniel Barenboim.

THE JUILLIARD ORCHESTRA is corn prised of over 100 students from around the world, and performs a full season of orchestra, opera, and dance programs at Juilliard. The orchestra has performed in Lincoln Center, Carnegie Hali, and on tour abraad. Its first tour of the Far East was made in June 1987, where the orchestra performed in the People’s Republic of China, Hong Kong, and Japan.

Modern music is not what it was. From the refreshingly relaxed viewpoint of the 1980s, what was once hailed as avant-garde is now decidedly derriere. The traditions of Western music are regaining their status as patrimony, and tonality itself has taken on new life. In Jacob Druckman’s words, „This is a very exciting transition moment in music— the looking backward. It is the first sign of release.”

Of the three composers recorded here, it is Jacob Druckmon (born in Philadel­phia in 1928) who has changed the most in his approach to composition. After years of involvement with serial techniques, it was in W/ndows (winner of the 1972 Pulitzer Prize for music) triat he began to readmit elements of the musical past into his work. Since then, pieces like M/rage (1976) and Aureole (1979) have played with materials borrowed, respectively, from Debussy and Bernstein. The more distant past, in the shape of the 17th-century Italian composer Pier Francesco Cavalli, has provided a jumping-off point in several other works.

Scored for a fairly large orchestra, including electric piano and electric organ, Chiaroscuro was commissioned by Lorin Maazel and the Cleveland Orchestra in honor of the United States Bicentennial, with the help of a grant from the National Endowment for the Arts. It received its first perform-ance on April 14, 1977, just four weeks after the score was completed. Here the influence of the Italian past is metaphorical, rather than specifically musical.

The titles of Druckman’s works—Incenters, Windows, Aureole, Prism—often display an interest in visual or spatial concepts. This time, he set out to give musical expression to the Italian Renaissance sense of chiaro-scuro—chiaro means „clear” or „light,” oscuro, „obscure” or „dark.” The effect is gestural, strongly atmospheric, full of sudden flashes of color and lowering banks of shadow. Putting aside traditional formal patterns, the composer creates a cogent replacement for them through his keen sense of music as an art that subsists in time: the „light” and „dark” elements are placed, now in simultaneous juxtaposition, now in telling isolation, in the shape of individual timbres and sharply differentiated modes of vibration.

Aftertones of Infinity, commissioned by the American Composers Orchestra, was completed in November 1978, and premiered by Lukas Foss and the American Com­posers Orchestra at Alice Tully Hali in New York City on January 29, 1979. In this work, which won Joseph Schwantner (born in Chicago in 1943) the 1979 Pulitzer Prize for music, the time element takes center stage in a fascinatingly paradoxical way. Indeed, the very title is a paradox, combining as it does the notion of infinity with the notion of „after”-ness. Schwontner has fashioned a piece with passages of suspended animation alternating with others where the rapid succession of chords or the onslaught of dynamic percussion create a poetic illusion—but only an illusion—of movement.

In such a style, „slow” and „fast” are equally illusory. There is something of the rapt mysticism of Olivier Messiaen in this music, with its tintinnabulating processionals flecked with high harmonics, its gnomic outbursts of solemn, statuesque brass, its recurrent „celestial choir” passages sung by the orchestra members, and its telling use of tuned crystal glasses—”You can hear them,” Schwantner observes, „but you can’t put your finger on the sound.” The piece takes its shape from a poem, written by the composer himself, a „kind of ‘creative generator’ ” that provides „a wellspring of extramusical images and ideas to which l would attempt to find appropriate musical analogues.” But instead of the specifically Roman Catholic imagery favored by Messiaen, it is the pantheism of a Whitman or a Coleridge that Schwantner’s lines evoke:

Dreams from a dark millenium—

on an eternal voyage,

to afterworlds beyond the edge of

of the children of the universe—

Stephen Albert, born in New York City in 1941, won the Pulitzer Prize in 1985 for his symphony RiverRun, completed the previous year. Albert’s work sounds more obviously distant from old fashioned serialism than does that of his two colleagues. His brush with serialism was perhaps less intense, and certainly his rejection of it more rapid, than theirs. While he shares their readiness to take inspiration from extramusical sources— several of his works are seftings or interpretations of James Joyce—it is his revitalization of thematic melody and tradiţional rhythmic articulation that makes his music more immediately accessible to a lay listener. But though Into Eclipse is classical in its sense of musical time, the direct way it moves from point A to point B should not prevent us from noting the subtleties of Albert’s style. His blend of diatonic harmony with expressive chromatic inflections and of irregular rhythms with osti-nato figures, striking a nice balance between dynamic and static elements, creates a lan-guage of vivid ritual feeling that is especially apt to his subject here.

Based on Seneca’s Oedipus in an adaptation by the modern English poet Ted Hughes, Into Eclipse spans an expressive range, from agitation and horror to the self-blinded king’s eventual inward-turned resignation. A song cycle laid out in five movements, it was composed in 1980-81 and also exists in a version for tenor and chamber ensemble. The full orchestral version recorded here was premiered on September 8,-1986 by Gary Lakes with Gerard Schwarz and the Seattle Symphony; it was revised in January 1989.

BERNARD JACOBSON (Bernard Jacobson, o former music critic for the Chicago Daily News, is program annotator and musicologist for the Philadelphia Orchestra, and author of The Music of Johannes Brahms and Conductors on Conducting).

was created as an independent entity within The Juilliard School in Novem­ber 1987. Through a regular release of recordings by The Juilliard Orches­tra and its conductors, it promotes the distribution and preservation of twentieth-century concert music by American composers. The JAMRI program thus seeks to build a recorded archive of distinguished American orchestral music. Projects are selected by an artistic committee of prominent musicians and are overseen by Juilliard’s President, Joseph W. Polisi, and the school’. 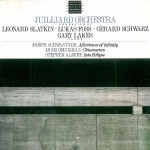