Victor Eresko won the first prize at the Marguerite Long International Competition in Paris in 1963, when he was a twenty-year old student of the Moscow Conservatoire. At the time Marguerite Long said about Eresko: „This young pianist is not only a virtuoso but an inspired poet having an excellent command both of the sound and the keyboard. He reminds me of Rachmaninov”.

Eresko received his primary musical education at the Lvov Music School. At the age of 1 6 he became the winner of the Competition of the Ukrainian and Moldavian Performing Musicians, in 1965 he graduated from the Moscow Conservatoire where he studied under L. Naumov, who was also his teacher at the post-graduate courses. In 1966 Eresko received the third prize at the 3d International Tchaikovsky Competition in Moscow and in 1968 the Harriet Cohen British International Society awarded the pianist a medal „For outstanding achievements in performing art”.

The pianist’s repertoire includes music of various styles and epochs, signi­ficant place being devoted to Russian music. At the year of the centenary of Rachmaninov’s birth Eresko gave a cycle of concerts of Rachmaninov’s works. All the works written by Rachmaninov for solo piano were played for the first time in the history of Soviet performing art. Critics of various countries are unanimously praising the originality of the musician’s exceptional pianism and performing manner, impeccable style combined with novel musical approach, virtuosity serving to solve the artistic tasks. 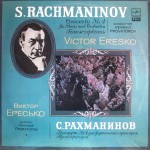 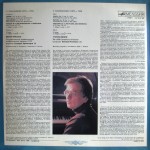