A Programme dedicated to the 25th anniversary of the Soviet astronautics

This disc features a group already well-known in the USSR and abroad. The first LP by „Zodiac” „Disco Alliance” recorded in early 1980 has beco¬me very popular among the music-lovers.

„Zodiac” is a studio-type group that can give form to its musical ideas and its own style to the full extent only in recordings. This hard „labour” requires great concentration and patience on the part of all the recording session participants, especially the recording engineer. „Zodiac” plays electronic rock music making extensive use of polyphonic synthesizers and other special effects that the recording technique offers. Having a lot of diverse possibilities at its disposal the group can create different types of compositions. One of them is a cosmic theme, which „Zodiac” has repeatedly turned to. Loading this theme with a new, higher quality was inspired by the visit to the Star Town where the musicians had a great success and met cosmonauts, specialists in this field. The meetings in Star Town, space flight accounts became an emo¬tional incentive for the group and the very titles of some compositions by Janis Lusens testify to the character of music played by this rock-group.

In 1982 „Zodiac” successfully appeared in Mos¬cow in the variety programme „The Baltic Youth” that concluded the arts festival „Moscow Stars” dedicated to the 60th anniversary of the USSR and the 19th Komsomol Congress.

„Zodiac” has completed its work in the motion picture „The Star Palette” (the Central Popular Science Film Studio), where it „commented” with its music the paintings of cosmonaut Alexei Leo-nov, twice Hero of the Soviet Union.

The creative quest of the group has not been terminated with this disc. „Zodiac” is trying to attain a more satisfying sound, to widen expressi¬ve means and to shape its own model of music in the world of our time. 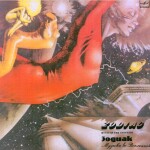