made in Czechoslovakia, exported by Slovart, Bratislava

recorded at the Studio of Koliba, Bratislava, April 1985

The Four Orchestral Suites (BWV 1066-1069) by Johann Sebastian Bach, the concertos and all other genres he dealt with, are still, 300 years after their author’s death, in the focus of attention of musicologues and music historians. We can hardly suppose that they are the only legacy Bach bequeathed us in this sphere, as we know these compositions from various copies only, for example those used at the performances of the Leipzig Collegium Musicum Bach had been member of in 1729-1741. However, they must have been written much earlier, in Köthen, in Bach’s most prolific period as far as instrumental music is concerned, i. e. between 1717-1723. In Leipzig, most probably, some of them only got their final forms as to their instrumentation (for example Bach added three trumpets and tympani to the scoring of Suite No. 4).

Even today the Four Orchestral Suites are extremely attractive both for interpreters and audiences alike. Perhaps we do not realize listening to these excellent pieces of music that Bach is the least original just in these compositions – if we can speak of something like that at all in connection with him. In the Four Orchestral Suites he observed the conventions of the period much more than in his concertos, fugues, organ chorales, suites for solo instruments and the like. However, no wonder that he did so, particularly in such kind of „applied music” as suites were. It is mainly the oldest Suite in C major which contains many elements and features which do not help to differentiate it from other works of the period by Telemann, Handel, Kusser and others. Bach not only took over the old principles of instrumentation, having employed the traditional trio in Lully’s style with woodwind instruments (French overture was a common practice) but thematic aspects as well. In spite of all that, we can recognize some features typical of Bach’s concertos of Köthen period: various accompanying thematic figures, fanfare motifs, and so on. Nevertheless the copious employment of middle voices in Forlan or the purposefully veiled, vague entry of Bourrée II can be found nowhere else but in Bach’s works.

Even the element of play and playfulness, many a time evoking the impression of constructivism are typical of Bach’s style. They cannot be considered to be only perfect constructions, ,,kits” of counterpoint parts, as they are methods by which he achieved a sort of relieving so-called doubles, the later trios in some dances. In Passepied II in the Suite in C major he shifts the original striking melody into the middle pitch position (even as to its significance) and oboes take over the initiative by their ethereal, elated counter-melody in high-pitch position. Bach further developed this unusual effect, achieved by very simple means, in Polonaise in the Suite in B minor. The original playful melody of the Polonaise turns into quite a clumsy base background for the gay, „curly” variation of solo flute in the Double. Are these mere playthings, or constructions? Most probably both. One of the „most melodious” melodies which has ever been written – Aria in the Suite No. 3 in D major, which is perhaps even more popular than Toccata in D minor owing to several more or less successful adaptations (from jazz and vocal to that for a synthetizer), though none of them reaches the standard of Bach’s original version-represents ‘unambiguously a contrast. U is simply a „baroque song without words” and it was not by chance that Suite No. 3 enjoyed great popularity already with romantics. This Suite is also the most festive of all. Mendelssohn used to play on the piano besides the fugues from the Tempered Piano and Inventions also the Overture from this Suite to Goethe. Goethe was very fond of the work: „… at the beginning it is so pompous and noble as if a festive train ascended a large staircase…” It is true, Bach’s orchestral suites do not lag in festive character behind such grandious works as Handel’s Water Music or the Music to the Fireworks. The final parts of the Suites No. 3 and 4 Gigue and Réjouissance are actual outbursts of joy connected with festive atmosphere, whereas the finale of the Suite in B minor (the famous Badinerie) associates the feeling of joy with playfulness, even antics.

Today, these four compositions, which 300 years ago stood on the borderline of so-called „applied” and artistic music, rank among the genuine gems of orchestral music.

The Slovak Chamber Orchestra, headed by its artistic chief and conductor Bohdan Warchal, is a body of chamber musicians. Each of them is a soloist performing both on his own and within the scope of the orchestra. The Orchestra’s road to success started in 1960, when the young players of the Slovak Philharmonic Orchestra gathered around the concert master Bohdan Warchal and made a decision to cooperate artistically in the sphere of chamber music. The Orchestra gained great success in cultural centres of Europe, the U.S.A., Canada, and Japan, particularly after 1966, when the talented young musicians evoked very favourable press responses both at home and abroad. Their twenty-year untiring activities speak of their high artistic standard, ascending curve of their mastery of performing based on brilliant technique, typical musicality – the assets, which help them to build their successful artistic career. 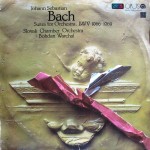 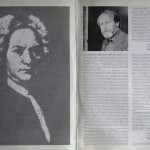