For two centuries, the Bach family has produced some of the most prominent composers, organists and pianists. Still in the first half of this century, Johann Sebastian Bach, the greatest musician of them all, fathered four sons, all of whom have grown up to be su­preme Masters. Indeed, who would not know Wilhelm Friedemann (the Halle) Bach, Carl Philipp Emanuel (the Berlin) Bach, Johann Christian (the English, a.k.a. Milanese) Bach, and Johann Christoph Friedrich (the Bueckeburg) Bach?… This majestic stream divides its superior potency into four branches, sending them to all regions of the world…” (J. F. Reichardt, Musikalisches Kunstmagazin – Berlin, 1791).

Johann Sebastian Bach took pride in the family musical tradition, so much so that in 1735 he recorded the history of his ancestors since the 16th century („Ursprung der musikalisch-Bachischen Familie”). His greatest hopes were laid into the eldest of his sons, to whose mu­sical education he paid enormous attention. After studies of law, Wil­helm Friedemann Bach (1710-1784) embarked on a musical career as an organist in Dresden, later moving to Halle where he became „Director of Music”. However, due to conflicts with local authorities he left that post, never again to enter a permanent office. Thus was frustrated one of music’s greatest talents. According to the testimony of J. N. Forkel, who was personally acquainted with W. Friedemann, „… he would rather fantasize, delving in his imagination into delicate peculiarities of music, than actually compose. Therefore, the fine com­positions of his own are not many.” The deep knowledge of musical rules which he acquired from his father, combined with an exciting imagination and an original musical idiom, produced the characteris­tic inner tension of his work. The Trio Sonata in A minor remained a torso, perhaps also because it proved virtually impossible to add anything at all to this ravishing sonata movement which is simultane­ously a fugue with virtuoso interludes. The preserved autograph score of the Sonata in F major for Two Flutes offers a genuine instrumental „dialogue”, ever changing and constantly captivating, proof of su­preme compositional mastery capable of conveying a crucial idea through the mere unaccompanied two-voice. The Trio Sonata in F major for Flute, Violin and Continue is quoted in Falck’s thematic list of the works of W. F. Bach, although the manuscript of the com­position bears no clear indication of the author’s Christian name. (Therefore also it is occasionally published and performed as a piece by J.C. Bach.) Its musical language is simpler, lightly melodious, showing different, warm aspects of the composers personality.

Carl Philipp Emanuel Bach (1714-1788) is today regarded as musically the most significant of J. S. Bach’s sons. He was equally es­teemed by Haydn, Mozart and Beethoven for whom his work pro­vided both instruction and inspiration in developing a new style. „In composition and piano playing, I have never had a teacher other than my father…”, wrote C. P. E. Bach in his autobiography. He spent 30 years as a harpsichord player in the brilliant Berlin Royal Orchestra, whereupon, in 1767, he was appointed „Director of Music” in Ham­burg. It was there, in 1788, shortly before his death, that he composed three quartets („Quartette fürs Clavier, Flöte, Bratsche und Bass”), whose key significance is parallel to that of Beethoven’s last string quartets in the latter’s work. Everything is original and new in this ex­quisite music: the thematic treatment, equal tasks assigned to each of the four voices, and the definitive departure from the basso continuo practice. Here, the Bach family genius enters a new era, giving it a most characteristic imprint.

In the two sonatas (for flute and harpsichord), musicologists vary in ascribing their authorship either to j. S, Bach, or C. P. Emanuel Bach. Fortunately, this is of little consequence to a record containing the music of five members of the Bach family. In the siciliano of the E flat major sonata, the harpsichord part is stylized as an imitation of the lute. Therefore, we set out to test how this enchanting movement would sound with the actual use of the lute, and the resulting effect was so charming that we attached it to the present recording, as an „encore”.

The Partita in C minor (BWV 997) is indisputably by J.S. Bach, but has been published alternatively as a piece for either lute or piano. Hermann Keller (in „Die Klavierwerke Bachs”) recommends its realization for flute and harpsichord. Taking into account the transposition by one tone that is commonplace in Bach’s transcriptions the top part actually does correspond precisely not only to the flute range characteristic of Bach, but also to the style and character of Bach’s flute parts in sonatas and cantatas. The thematic closeness with the Musical Offering (in the fugue) and with the final chorus of St. Matthew Passion (in the saraband) attests the spiritual depth of this composition which enriches the baroque flute literature by a value of the utmost relevance. Likewise, the score of the Six Sonatas for Organ (or pedal harpsichord) is identical with the notation of trio sonatas whose style, form and instrumental articulation Bach imitated (for instructive .purposes). Two movements from these sonatas can be found in other trio pieces by Bach. This suggests .the option of transposing also the remaining movements into the trio form with realized basso part, option which is all the more alluring because otherwise only the original trio sonatas that are incontestably by Bach have been preserved. One of them is the Sonata in G major (BW 1093) for Two Flutes and Continue. It originated in the happy period of Bach’s stay at Koethen, and its richness of invention, formal perfection and sweetness of sound, as well as the distinctiveness of its individual movements (e.g., the good-humoured calm of the second movement, and the profound emotive-ness of the third), rank it amongst the Maestrp’s loveliest pieces.

Both of Bach s sons from his second marriage acquired only rudi­ments of musical training in the paternal house; after their father’s death in 1750, they were taken care of by their elder brother, Philipp Emanuel. Johann Christoph’ Friedrich Bach (1732-1795) spent most of his life as a chamber musician in Bueckeburg. He was a quiet, modest and nice man. Analogically, his music too stayed within the limits of moderate expression. Among the Bach brothers, he was regarded as the best piano player, and indeed, it is in compositions for the piano that his originality stands out most prominently, a fact that has been fully recognized only recently. The Trio Sonata in E minor is an early piece, formally belonging still to the baroque, yet its clear, fresh and instrumentally ingenious musical idiom already augurs the rococo.

The youngest of the brothers, Johann Christian Bach (1735-1782) was the sole member of the family to live permanently abroad: his studies under Padre Martini in Milan were followed by an early success as an opera composer, whereupon he set up a concert association in London, became the queen’s music teacher, accepted extremely attractive invitations to Paris and Mannheim, received commissions for operas from Europe’s leading scenes… Equally as no parallels can be drawn between his own and his father’s life-styles, so his music belongs to another era, one with a different pulse and a different living experience. Johann Christian Bach went through this experience in an authentic and intense manner. He had to write a music that would be in accord with his feelings: a simple, fresh, tuneful music for an audience that had neither time nor desire to reflect, for a public that was to be won over and captivated at first hearing. Quite fittingly, his music appealed greatly to the young Mozart. Not even two centuries have deprived it of its vitality and sensual charm.

Apart from an abundance of beautiful and sophisticated music, this selection of chamber pieces by the five Bachs offers a confrontation of five highly autonomous personalities whose family genius continues to send out beams of light of great contrast, yet invariably warm and life-giving. 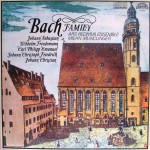 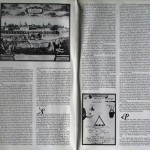 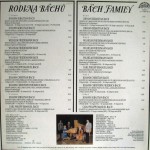