Petr Spálený & Apollo – Sail with me

Petr Spálený & Apollo – Sail with me

Recorded at the Supraphon studios, Prague, in December 1971

Petr Spálený ‘s first outstanding success was his interpretation of the song Plakalo baby (Blubbering Baby) whose melody was written by one of the members of Spálený ‘s accompanying orchestra, Pavel Krejca. The English version of the song can be heard on this record. Thanks to the Houpačka radio hit parade – at its time a very popular programme that brought many good songs and new interpreters to the notice of the public – Petr Spálený singing won great publicity. And thus when the Apollo Theatre ceased its activity it was not difficult either for the singer or the group to stand on their own feet. His brother Jan, saxophonist, trom­bonist, arranger and composer, was extraordinarily successful in his choice of a repertoire. Moreover, his excellent arrangements, which gave the singer a new sound back­ground, and his composing activity formed a good programme support for both the vocalist and the group. Dexterous management, purposeful styling and concentration on a very definite circle of listeners brought good results and Petr Spálený ‘s lucky star begin to rise.

Today the reasons for Petr Spálený’s popularity can be described as a whole. Many things can be explained on the basis of a musical critical analysis.

Nevertheless, there is still something in his career that can be attributed solely to the mystery that calls forth a „yes” or „no” from his listeners. When we listen to Petr Spálený ‘s pedal voice, in places seemingly lower than it really is, we find ourselves asking how it is possible that at the time when in order to express themselves singers resort to the latest gimmicks and run up to the highest range, sing in a falsetto voice, shout and goodness knows what else in order to meet the taste of their public, a singer who employs none of these tricks and in fact does just the opposite can win success. But perhaps that is just the reason: instead of ecstatic tension he brings relaxation instead of tonal equilibristics a calming, purring voice, instead of movement on the stage an almost novel immobility. In Petr Spálený there is really something of the calm Popeye the Sailor and the deliberation and experience of good old Uncle John. H e sings about ordinary things in the most ordinary way and his young public, perhaps a little less provocative than the usual audiences of that age today, love him for it. They also love him because in front of the wonderful Apollo group they do not see a god-like Apollo, but a simple, inconspicuous person who is well aware of this weak points, but able to overcome them with a little insight and self-irony. If you understand this then his invitation “Sail with Me” was not in vain. 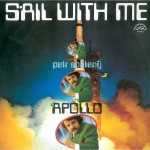