The „Periniţa” folklore ensemble of the Bucha-rest Municipal People’s Council was set up in 1948 and ever since it nas been engaged in turning to account the rich and varied Romanian folklore. Under the direction of Viorel Doboş and later of Nicolae Patrichi, the ensemble, with all its sections, gave many successful shows in Bucharest and in other parts of the country and went on tours abroad in the Soviet Union, Czechoslovakia, Poland, the German Democratic Republic, Yugoslavia, Vietnam, China, Corea, Mongolia, Algeria, Tunisia, the Lebanon, Israel, Turkey, France, Switzerland, Italy, Austria and Brasil. The „Periniţa” group has been awarded distinctions at se-veral internaţional folklore competitions and festivals : Agrigento – Italy (1958], Vienna (1959) and Bursa-Turkey (1966), competitions from where it brought back home as many first prizes.

The folk music bând has always occupied a special place in the artistic activity of the group. Now it is a well known and highly appreciated artistic team, thanks to its carefully selected and worked-out repertoire performed in a brilliani manner. The bând is made up of 64 instrumentalists, coming mainly from the geogra-phical aree known as Muntenia, or — with an older name — Walachia. Most of the music played by the bând, as well as the harmony of the tunes and the instruments used reflect this particular composition. The characteristic music of other regions is represen-ted by several soloists coming from those areas; Măria Pietraru and Ştefania Rareş (Moldavia), Ştefania Stere (Dobrudja), Eugenia Ticu (Oltenia), Gheorghe Lazăr and Remus ‘Bistriţa (Banat).

The basis of the orchestra is made up of strings, mainly violins, supported by altos, cellos and basses. The „cobza” — the oldest string instrument of the Romanian people —, the „dulcimer” (cymbalom), as well as some wind instruments, which have become popular with Romanian folk music bands, the „nai” or the „pan-pipe”, the clarinet, the „torogoată”, the accordion are added. Several solo instruments : the bag-pipe, the shepherd’s flute and the fish-scale also create the band’s musical peculiarities.

A conspicuous feature with the bând is the „oral” way they work out their repertoire. The choice of the tunes, as well as the arrangements are the result of the laborious and creative activity of the director, who permanently receives the advice and collaboration of the soloists and other members of the group.

This record presents a selection from the repertoire of the folk music bând and of its soloists, sin-gers and instrumentalists, under the baton of Ionel Budişteanu. 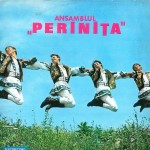